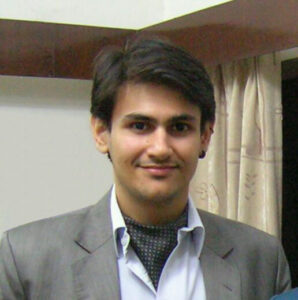 Auto-restarting the WebSphere JVM after a crash can be a useful feature for ensuring uptime and minimizing downtime. In this blog post, we will discuss how to enable the auto-restart setting in WebSphere.

First, navigate to the Monitoring Policy under Java and Process Management section for the Application Server in the WebSphere administrative console. In the Monitoring Policy, you will find the option to set the Node Restart State. Change this setting to “Running” for the JVM in question.

It’s worth noting that this setting will also bring the JVM up when the node is started, ensuring that your application is always running and available.

Additionally, it is recommended to monitor the JVM logs, and in case the JVM crashes frequently, it’s best to investigate the root cause of the crash.

For more information, refer to the following link: https://www.ibm.com/support/pages/automatic-restarting-websphere-services

In conclusion, auto-restarting the WebSphere JVM after a crash can be a useful feature that helps to ensure uptime and minimize downtime. By following the steps outlined in this post and the reference link provided, you can easily enable the auto-restart setting in WebSphere and keep your application running smoothly.

Well, reference documents vanishing from IBM site is no new news. This is what happened with the DBC Technical Reference Guide that was available on the IBM site till last year. I was looking for it a few days ago but couldn’t find it on the IBM site. I thought it was gone along with all the other developerworks articles.

But thanks to Cezar Tipa who had an offline copy and Biplab Das Choudhury who shared it on Linkedin a copy of it is still available.

I downloaded a copy and uploaded it here. You can find a link to the document below.

This is for an old version but helpful.

Update the JAVA_HOME variable to point to the location where the JDK is installed. Restart WebSphere Application Server for the changes to take effect.

Have you ever come across a situation where your development environment WebSphere is on Linus/Unix and you don’t have access to the filesystem to hot deploy your class changes for testing? Well it’s pretty common if you are working for a big company which has lot of security policies in place. But what do you do? Do you go through all the pain of building the EAR and deploying it to WebSphere only to realize that there was a small piece of code that you missed and that you have to build and deploy all over again! Isn’t that really frustrating!

What I am going to tell you is not as quick a fix as doing a hot deployment, but it does save some deployment time. With this, you won’t need to build the EAR all over again, just have to do the deployment which takes half the time of a full EAR deployment.

Lets take an example – I want to deploy a class – abc.class in businessobjects.jar at the this path – com\pk\cron. Under the enterprise applications section in WebSphere, there is an option called Update which will let you upload/update this file in the businessobjects.jar. With this you can upload new files or update existing files.

Follow along with the screenshots, it pretty much self explanatory. Only thing you have to be careful about is the path inside the application EAR, that should be correct or WebSphere will place the file in wrong path. If you are not sure about the path, open the EAR, navigate through to the folder where you want to deploy the file and copy that path.

In this case the path is – businessobject.jar\com\pk\cron\abc.class

businessobjects.jar BEFORE uploading the file – 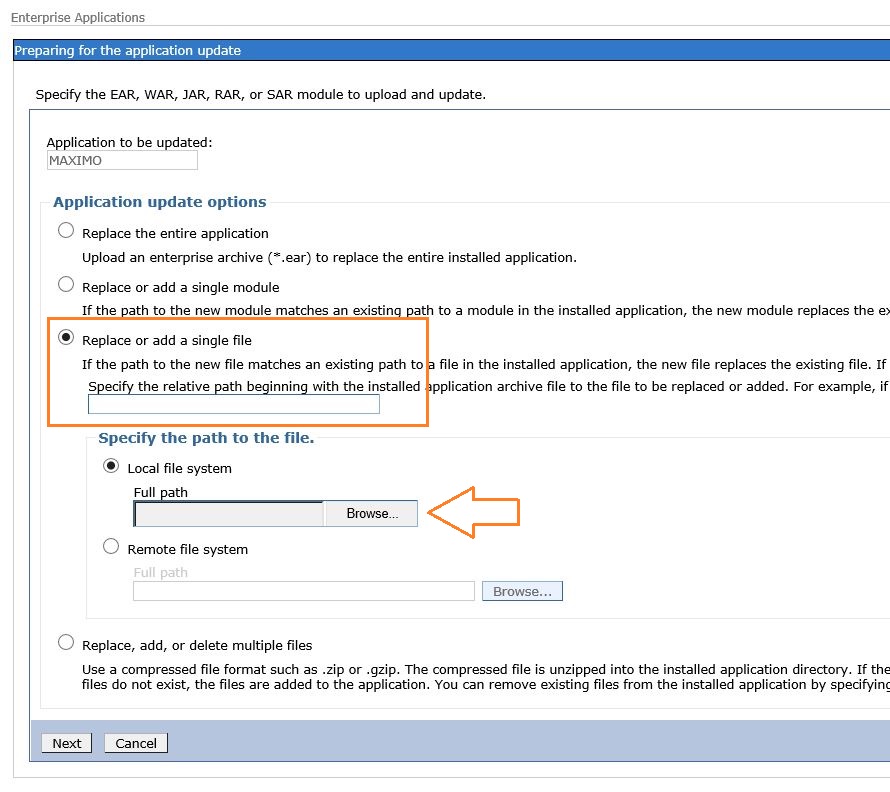 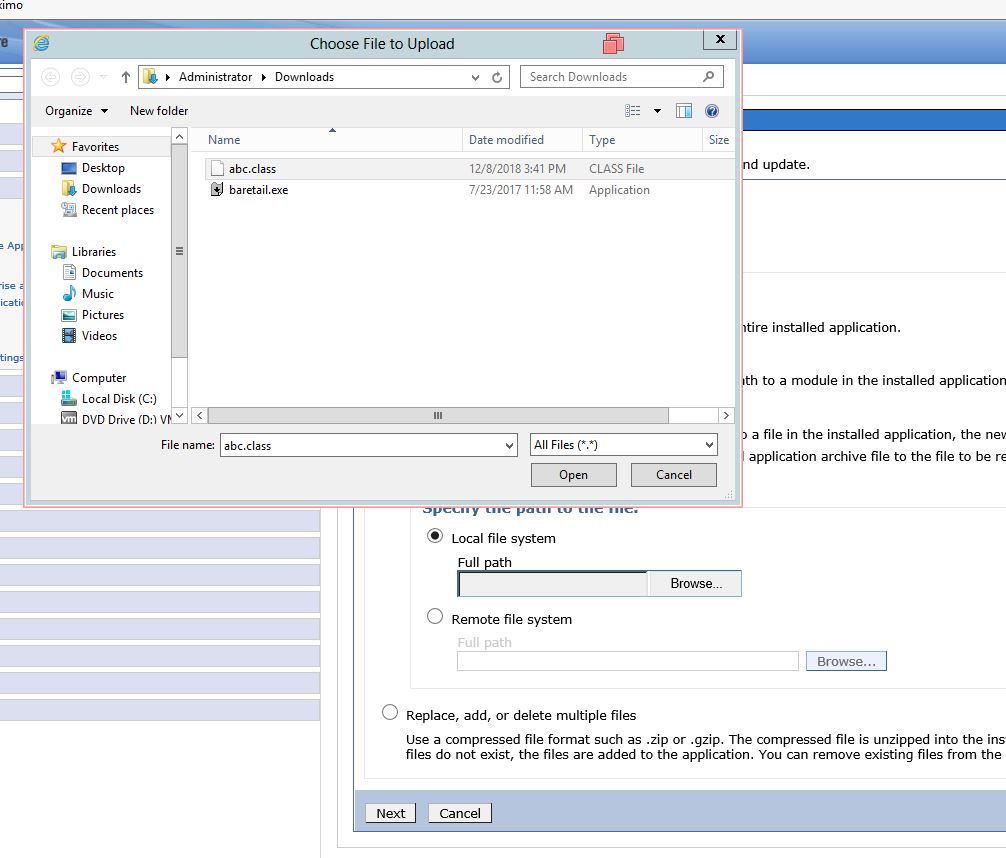 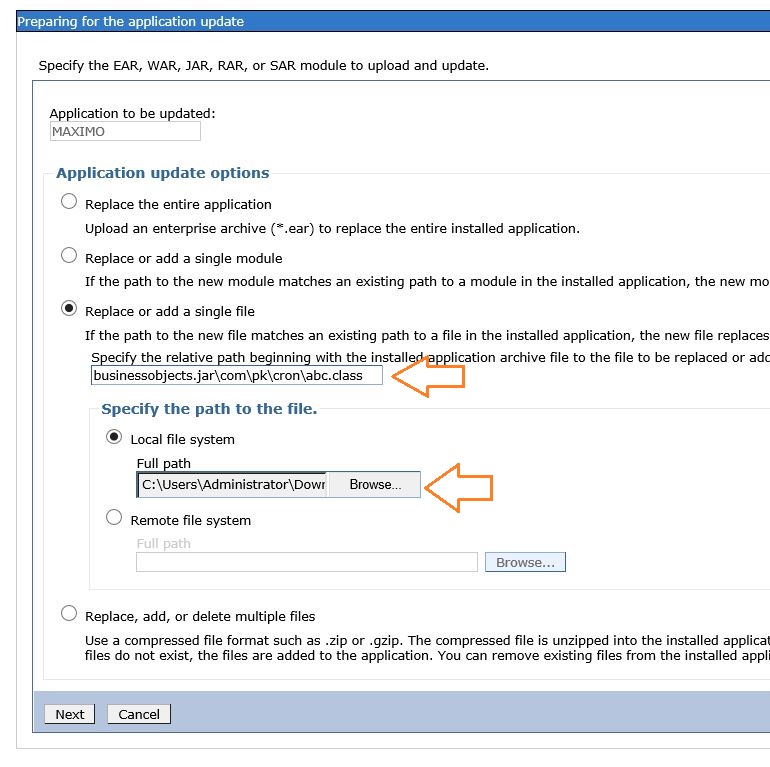 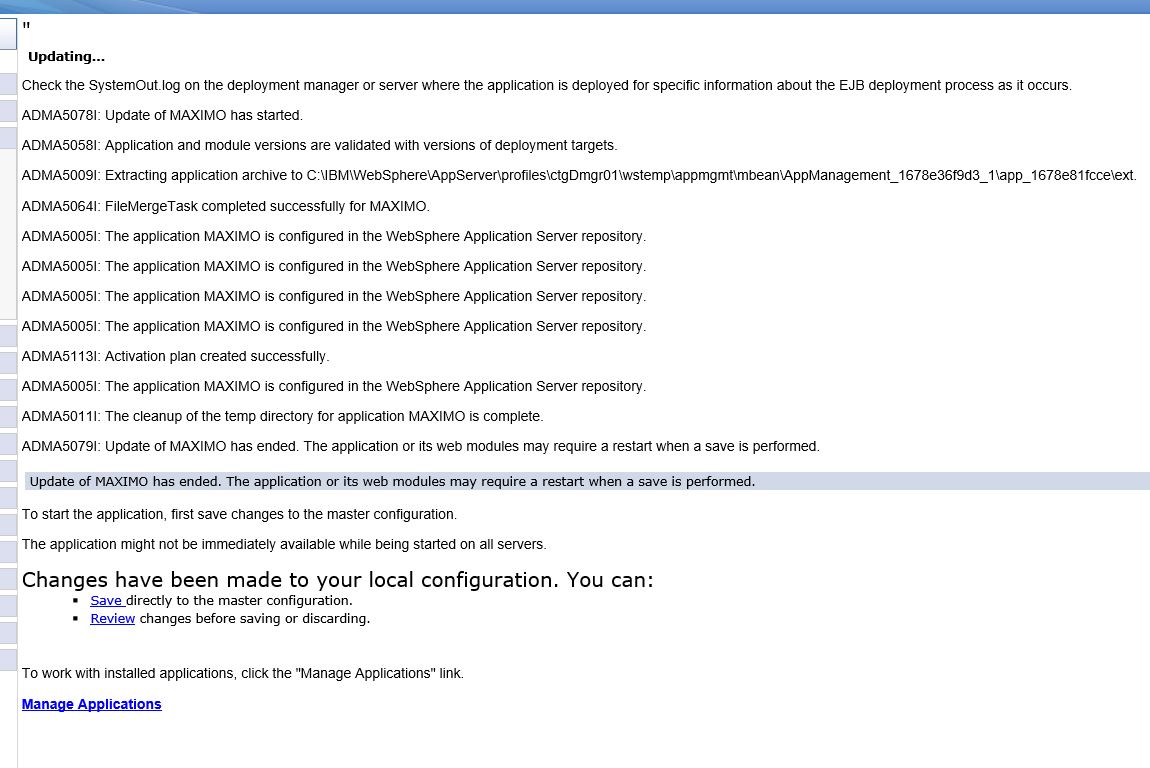 businessobjects.jar AFTER uploading the file –

What that means is I wouldn’t be updating or publishing blogs on maximoconcepts.wordpress.com anymore, I would be doing it here from now on. From the looks and feel prospective, nothing has changed, your experience would remain the same.

Unfortunately, people who had subscribed to my old blog will have to subscribe again here. I would do my best to subscribe them myself, if you get a subscription confirmation request from this blog, please accept it.

So for the latest updates you are at the right place. There is a whole new section on the right panel for subscribing so don’t forget to subscribe!

How does IHS load balancing work?

IHS or the IBM HTTP Server is an apache HTTP server implementation with a topping of IBM configuration. IHS is not a part of WebSphere but you can install it separately and add it to WebSphere, that way you can manage it using the WebSphere console.

In addition to all the function of a webserver, IHS can also be used to as a load balancer which means you can use IHS to spread the traffic evenly across all your JVMs and in case a JVM crashes or is otherwise down, traffic won’t be routed to that JVM.

For IHS to do the load balancing it should have the understanding of the clusters, JVMs that are there in those clusters, virtual hosts, context roots, etc. and since IHS is not a part of WebSphere there needs to be a way for it to do that, this is where the plugin comes in. The plugin is basically an xml file that has details of the clusters and it members, virtual hosts associated to the applications on the clusters and a lot of other details. By default this file is updated every minute to keep the latest configurations updated.

The plugin has to be installed separately and should be linked to the IHS. If you use the launch pad to install the plugin, it takes care of associating the plugin to the IHS, if you are installing it manually you need to make sure you link it to the IHS.

That’s it for today!

Let say you want to migrate an object from one environment to another. You create a migration manager package for that object which includes all its attributes but not the domains that are associated with those attributes. When you deploy this package to the target environment, it would fail if those domains don’t exist there.

Migration Manager has its own section for mentioning dependencies and most the out of the box migration groups have dependencies already specified. 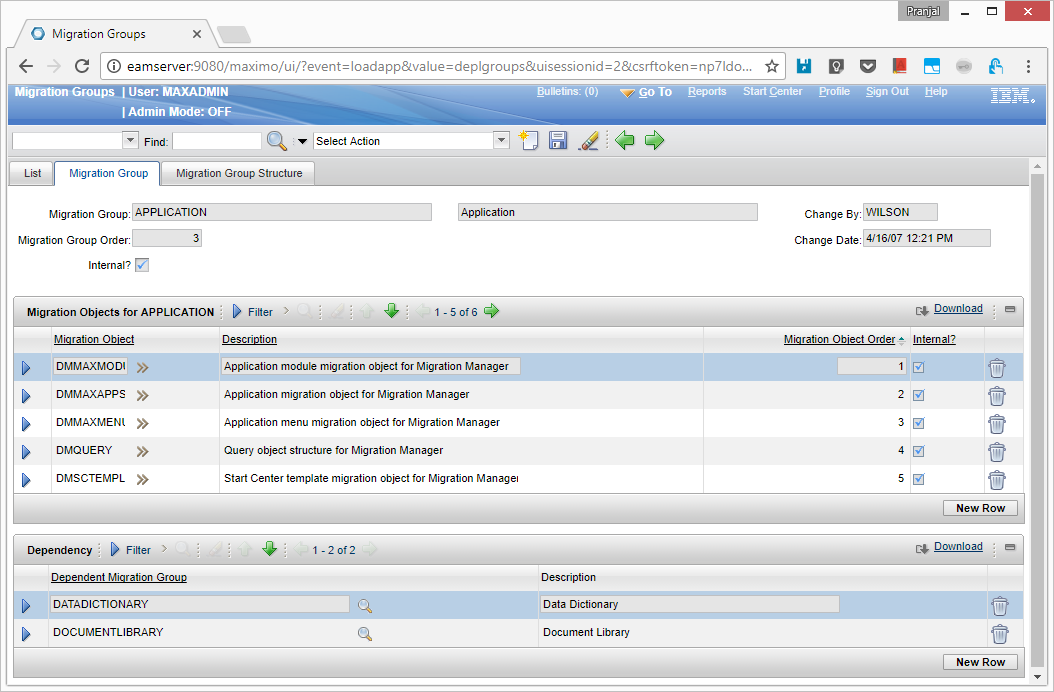 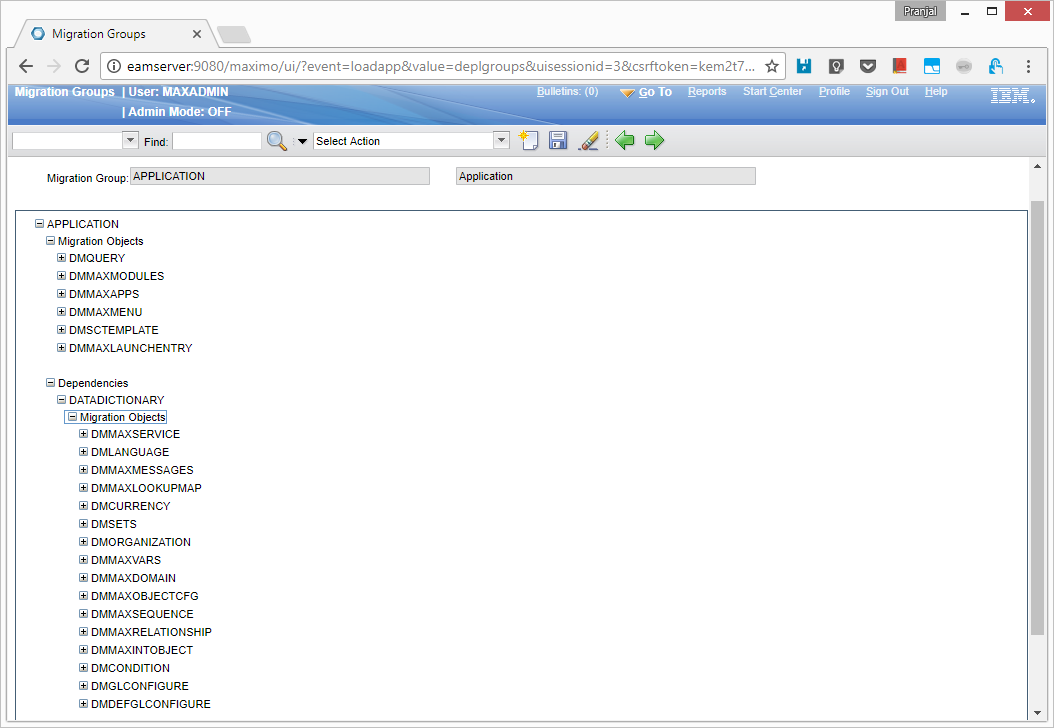 But I don’t prefer using this dependency functionality of Maximo and here’s why – If you see the images above, Data Dictionary is one of the dependencies for the application migration group which should be the case but what this would do is take the entire data dictionary from the source environment and deploy it in the target environment.

You really wouldn’t want to do that because

Unfortunately if you don’t know about this feature of Migration Manager or you are not careful about it, you might unknowingly migrate certain configuration that were not required.

So it’s better to maintain dependencies by you yourself then having Maximo maintain it for you.

Have a great day!

If you have ever worked on interactions in Maximo, you would know how easy it is to set up one and start fetching data from a webservice. It helps you avoid the hassle of writing and maintaining custom code with just a few configuration steps. Practically it does all the work for you – from creating objects and relationships to setting up the dialog box and sigoption to display the data.

But when it comes to adding a new attribute to be fetched and displayed from the webservice, it requires the entire thing to be created again. This means the interaction and all its configurations have to be scrapped and recreated with the new set of attributes. That’s a lot for just a field addition.

So I thought what if we manually add this attribute to the objects and to other configurations and see if it works out.

To explain this better, I have an interaction that fetches all the football matches that have been played in the city (which is the location record in Maximo). The data is just fetched from the webservice for display and not inserted or committed anywhere. 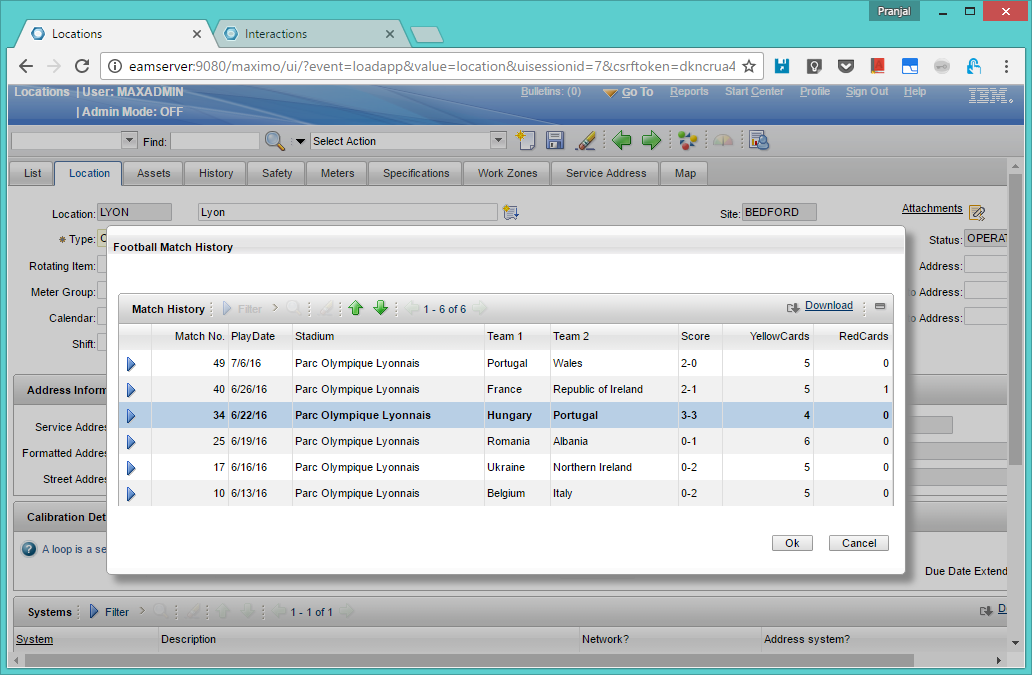 But I noticed that still the data was not being fetched and shown in the field. So I did some more research and found that there is an OBP (Object Blue Print) field in the MAXINTERACTION table that keeps the xml schema of the request and response for the interaction. The new field needs to be added to that schema for it to work. So I updated the schema and Voila! it worked! 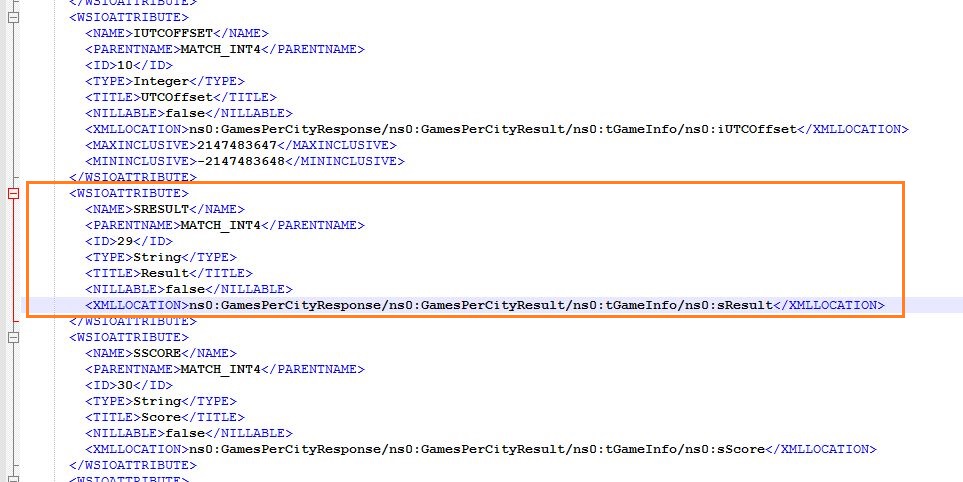 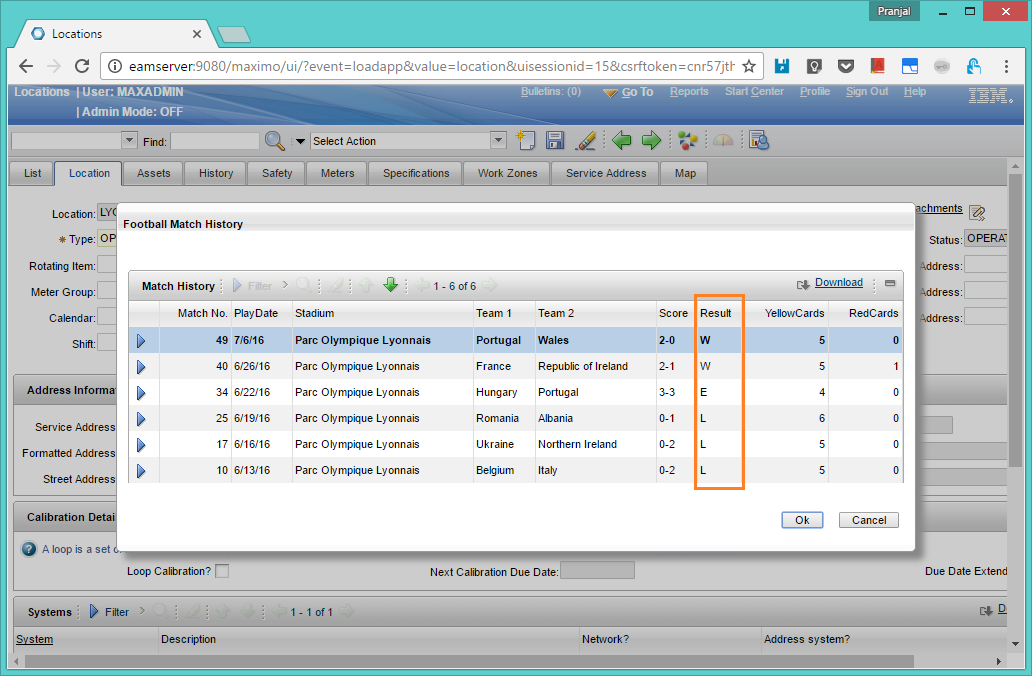 Please note that this solution is applicable only if the field already exists in the webservice schema and only needs to be displayed in Maximo.

I recently came across a feature in Maximo that can be really useful in scenarios where meter reset/meter changes are not so rare occurrences. 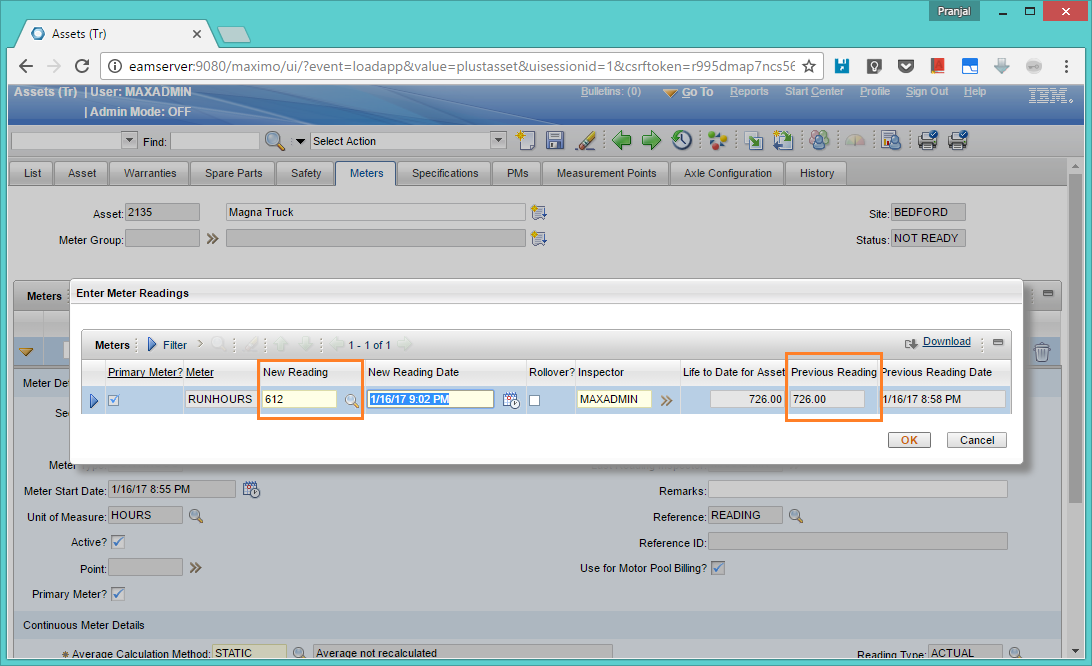 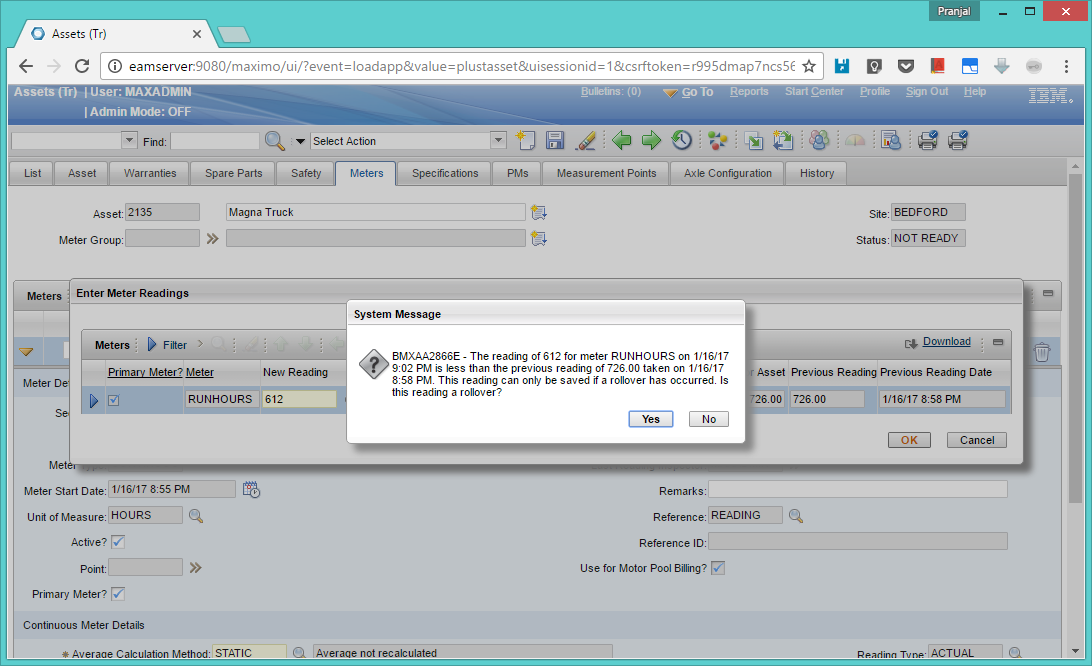 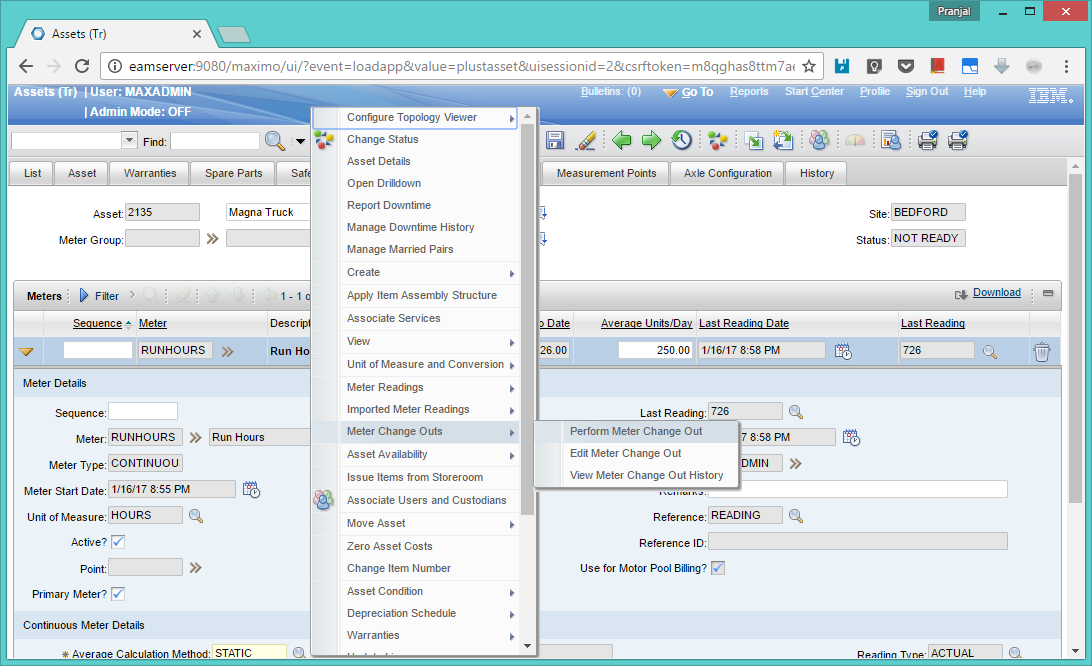 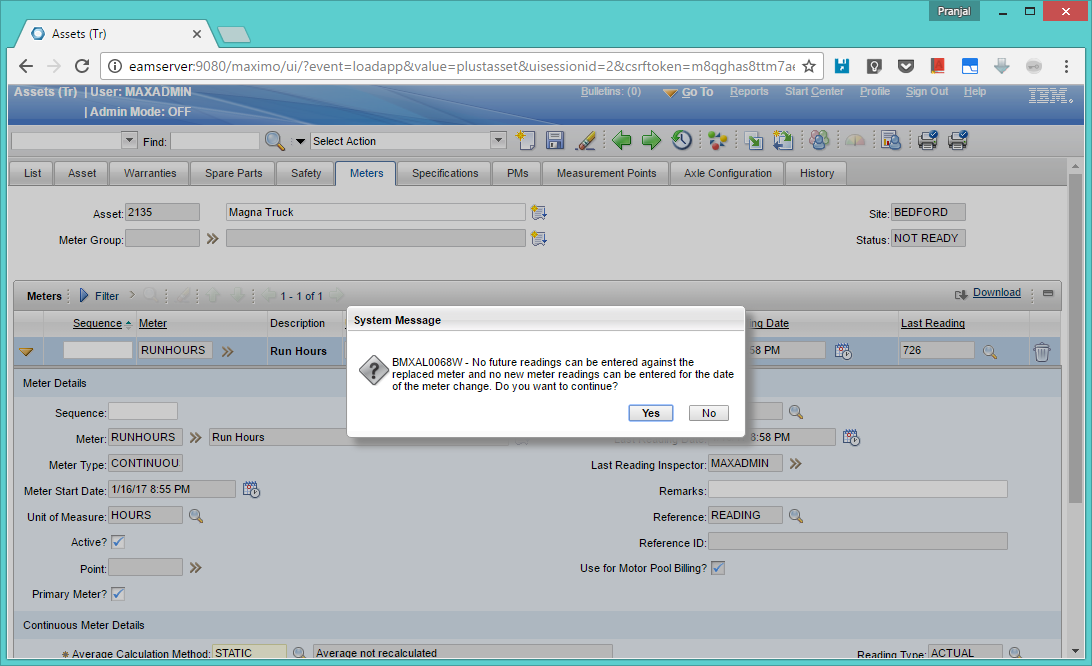 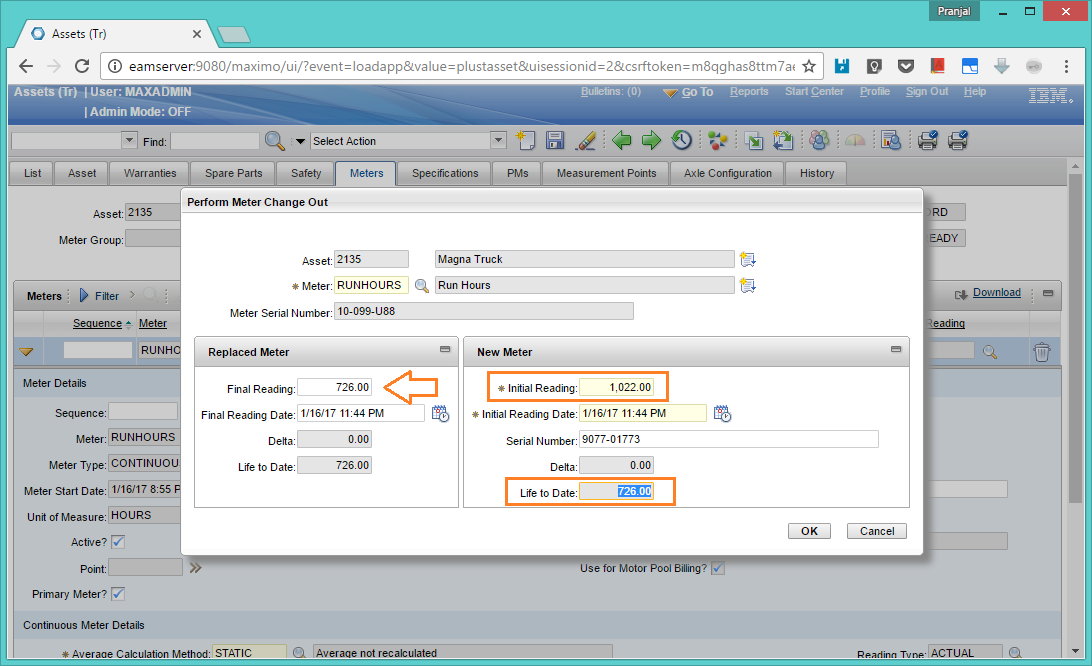 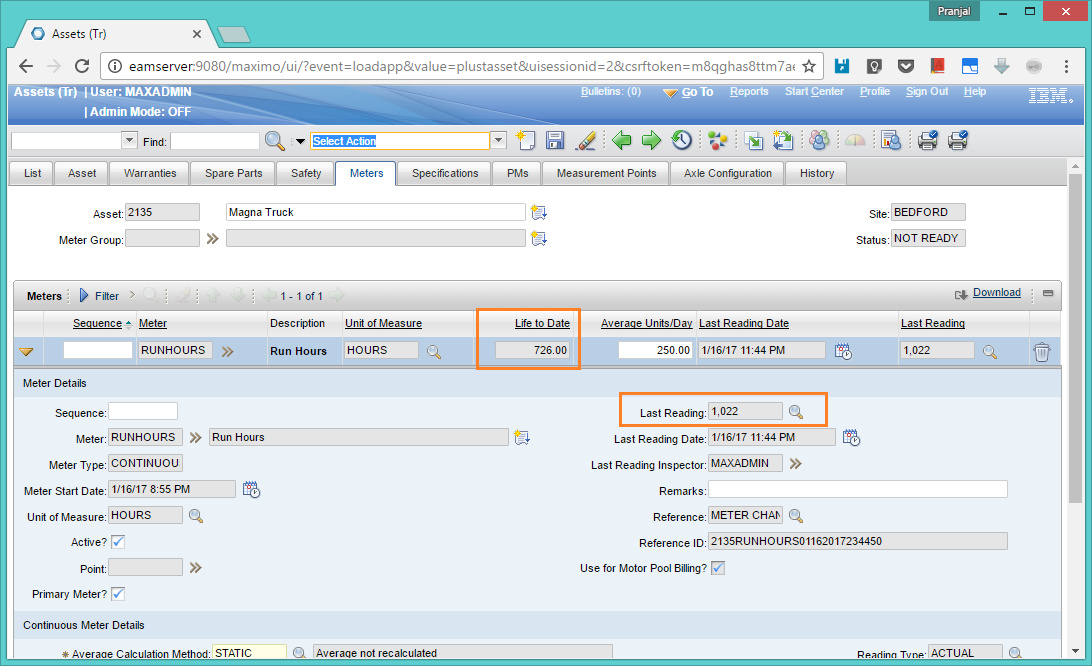